reviews, news and all things books

The Summer I Fell 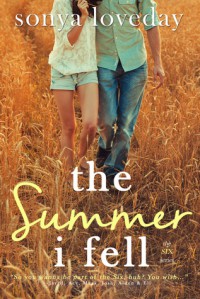 “So you wanna be part of the Six, huh? You wish…” ~Jared, Ace, Mark, Josh, Aiden & EliRiley Clifton can’t remember a time when she wasn’t a part of the Six, a group of rowdy boys who would do just about anything for her. Growing up alongside of six guys is never easy. Especially in high school. Falling in love with one of the Six? Even harder when Ace has a hold of her heart, and he doesn’t even know it. Jake (Ace) Aceton has loved Riley for a long time, but has kept the secret oath of the Six. Riley was off limits. At least until after graduation. When he overhears Riley admitting to her best friend, Paige how she feels about him, Ace doesn't let his chance slip by. Riley, in his mind, has always been his.When her college plan falls through, and her future is left to the hands of fate, Riley finds herself scrambling to keep up with all the changes. But that's not the hardest part. The hardest part is saying good-bye, especially to Ace. Heartache, hard lessons, and a love deeper than her Alabama roots will threaten to crumble Riley’s world as she waits for Ace’s return. Will Riley and Ace’s love be strong enough to hold them together when life tries to tear them apart?

Thank you to Sonya for sending me a copy of this book to review.

The first thing I'm going to say is make sure you have at least 2 boxes of tissues nearby and are wearing waterproof mascara when reading this book.

The six have a great friendship. Each member has a different personality but they all compliment each other. Jared is the joker. He's constantly making people laugh but he's also the one winding everyone up. He knows exactly how to irritate you. He would definitely be a great person to have around when your feeling down. Josh and Jared love their music. They both play the guitar. Mark loves his photography and is always trying to capture the best moments so that they never forget them. Eli was the last member to join the six but he made them become the six before that they were just a bunch of guys who always seemed to be together. Aiden is the quiet one but like they say it's the quiet ones you need to watch out for. The one thing they all have in common is they would do anything to protect Riley.

Ace is the strong silent one. He has a temper that you can see flare out of control on occasions. He's also the one that Riley is in love with but she hasn't quite worked out how to tell him yet.

There are a lot of sad moments in this book and I could relate to how they all felt leaving each other behind. It reminded my of the end of Uni. I had such great friends that had been there with me for the last 3 years. We'd had our ups and downs, gone through good times and bad and the thought of them not being a few doors down from me any more was heart breaking. I knew they would always be on the other end of the phone but deep down you know it's just not the same.

There's also a lot of funny moments. There were times when I had tears from the sad parts on my cheeks then I would be laughing so hard at the next sentence.

Paige is Rileys only female friend. She was pretty great to her. She always told Riley the truth even if it wasn't what she wanted to hear. She also gave her a big kick up the backside when she needed it.

Riley and Mary helped each other a lot during the last few chapters. I'm glad they could be there for each other.

I loved every single page of this book and I honestly cannot wait for the next book in the series. That ending KILLED me.

This review was originally posted on Chicklit vs Fantasy
Tweet